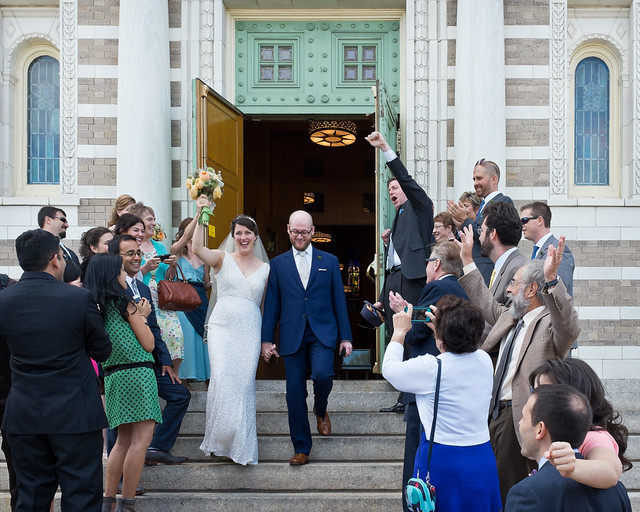 My brother, Adrian, and his awesome wife, Margaret, got married in Boston over the summer (in Cambridge, specifically). They got married near the end of August, and the whole thing just couldn’t have been better— the highs were around the mid-70s, and everything went off without a hitch. It was just wonderful.

I would have normally brought my DSLR with me with me to Boston, but in the weeks leading up to the wedding, I realized that pairing a DSLR with a wearing-to-a-wedding dress would have all the grace of a boat anchor around my neck. So I decided to rent a Fuji X100S—it worked a treat, and it couldn’t have been half the size of my DSLR.

The wedding was on the Saturday afternoon at St. John the Evangelist in Cambridge. The church was only a little over a mile from the hotel where we were staying, but with the heels I was wearing, I wasn’t about to walk there. So we just took a bunch of taxis, and that worked out fine.

I couldn’t be happier for Margaret and Adrian. Those two are the bees knees, and I wish my brother and my new sister the very best.

One thought on “Photos from Margaret and Adrian’s Wedding”